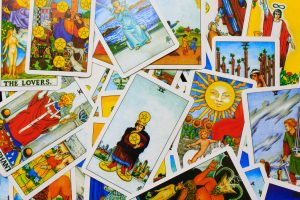 The early origins of tarot cards have always been shrouded in mystery, with popular theories claiming their creation in such diverse places as India, China, ancient Egypt, ancient Babylon, ancient Tibet or even lost Atlantis. Some even blame the devil for the tarot, calling the cards the ‘devil’s picture book’ but historians have traced the first recorded appearance to Europe in the late 1300’s when the cards were used for games.

Around the 14th century, in Venice and Piedmont in northern Italy, there was a popular card game called Tarocco or Tarrochi.  It used a 78 card deck and was divided into what was called minor arcana and major arcana.  It was decorated with imagery reminiscent of the current tarot deck – imagery that caused the church to accuse the tarot of being the devil’s picture book during the Holy Inquisition.

It has been theorised that the suits of these early decks represented different society levels – with wands/batons for peasants, coins/pentacles for merchants, cups for clergy and monastic orders and swords for the aristocracy.

As it became more popular, many further deck variations were produced and in these early tarot days, the number of cards in a deck varied between 97 (in Florentine) and 62 (the Bolognese tarot.) It wasn’t until the late 18th century that one of the most popular and influential decks, the Marseilles tarot, was produced, and it is thought that the tarot deck began to be used for divination around this time.

The Marseilles tarot was influenced by French occultists Antoine Court de Gébelin and Etteilla who created their own decks and theorised about the links between the tarot and Ancient Egyptian mysticism and Jewish Qabbalic traditions.  Later esoteric practitioners during the 19th century, such as Eliphas Lévi, Gerard Encausse ‘Papus’ and Oswald Wirth, took up these ideas; and these ideas, in turn, inspired members of the Hermetic Order of the Golden Dawn to create their own decks and led to the modern popularity of the tarot cards.

The Order, whose membership is said to have included W.B. Yeats, Bram Stoker, Algernon Blackwood and Sax Rohmer, believed that the tarot was a key part of a unified esoteric system that also included astrology, numerology, ritual magic and the Qaballah.  One of the Order’s more famous members, Aleister Crowley, produced his own tarot deck – the Thoth tarot - but it was a deck created by two other Order members that became one of the most popular tarot decks in the western world.

The Rider-Waite Smith deck was created by two of the Order’s members – illustrator Pamela Colman-Smith and writer Arthur Edward Waite and it is often the first deck new tarot readers use to learn their art. Beyond that, the Rider-Waite Smith deck has become the inspiration for a great many of the decks that came after.  Its symbology and design have been adopted and adapted in a huge variety of ways leading to the astounding range of decks available today.